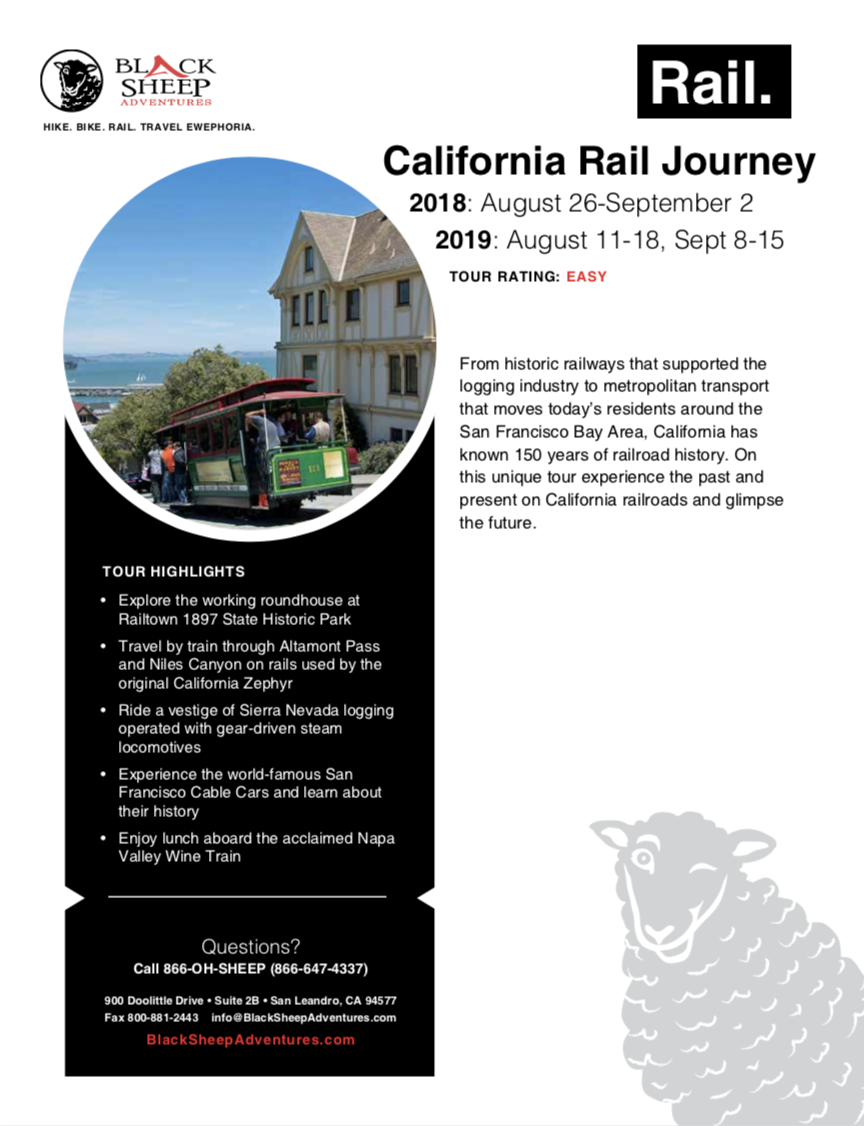 Besides its unique history, climate and geography, California’s innovations draw world attention, and its railroads have played their part. They promoted scientific agriculture that enabled California farmers to produce crops grown nowhere else. Faced with a critical labor shortage, Central Pacific Railroad showed what Chinese workers could do. Coal mines were far away, so CPRR steam locomotives pioneered industrial fuel oil. The first land-based container crane was built alongside Oakland’s freight yards, and 25 years later Asian products reached Europe faster by train from Oakland to New York than through the Panama Canal. Since 1960 California has been a bellwether for passenger rail, adding three state-sponsored Amtrak routes to its four national ones, expanding Bay Area commuter service to 400 interconnected miles, and launching construction of High-Speed Rail between its 3rd 4th and 5th largest cities. We will experience this heritage, and its west-central California setting, during six memorable days. 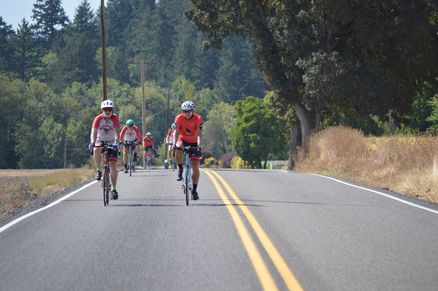 Day 2 — San Joaquins and Railtown 1897 State Historic Park
Depart Oakland’s Jack London Square Amtrak Station aboard a San Joaquin to Stockton. Next, a short drive brings you to California’s Railtown 1897 State Historic Park, home of the Sierra Railway and the embarkation point for the first of your heritage-railway rides this week. After a tour of the historic roundhouse and its locomotives, you’ll travel to your hotel in the foothills of the Sierra Nevada at Oakhurst, California.
Meals included: Breakfast, Lunch & Dinner

Day 3 — Yosemite Mountain Sugar Pine Railroad
A vast network of logging railroads once existed in the Sierra Nevada. Vestiges survive, and today we ride one of the best of them. It’s the Yosemite Mountain Sugar Pine Railroad, which has been in existence for 42 years and narrowly escaped destruction by a forest fire in 2017. Its two gear-driven Shay steam locomotives had operated on West Side Lumber Company rail lines until 1960, and its track occupies part of the original roadbed of the Madera Sugar Pine Lumber Company’s railroad, which ceased operation in 1931. After lunch and a short drive to Madera, stopping on the way to view the 1,600-foot Fresno River viaduct built last year for the California High-Speed Rail system, you’ll re-board the San Joaquin for the return to Stockton.
Meals included: Breakfast, Lunch & Dinner

Day 4 — Altamont Pass / Niles Canyon; San Francisco and Cable Cars
This morning we ride the route used by the pre-Amtrak California Zephyr between the San Joaquin Valley and its terminus on the east side of San Francisco Bay. The Altamont Corridor Express will take you over Altamont Pass and through Niles Canyon. You’ll transfer to Caltrain for a ride into San Francisco on rails Southern Pacific’s Coast Daylight traveled. You will experience San Francisco Municipal Railway (“Muni”) light-rail and cable car lines on your way to the Cable Car Powerhouse, which doubles as the cable car museum. Ride a cable car to the foot of Hyde Street. Dinner is on your own tonight, and you will reach our hotel on one of the historic streetcars that ply Muni’s acclaimed F-line on the Embarcadero.
Meals included: Breakfast & Lunch

Day 6 — California’s Newest Railroad; California State Railroad Museum
Today’s train ride is on California’s newest commuter railroad: Sonoma and Marin Area Rail Transit–SMART. A revival of the south portion of the Northwestern Pacific, SMART was authorized by the California Legislature in 2002 and funded by a sales tax initiative approved in 2008 by voters in the two counties it serves. Its first 43 miles, between the Sonoma County Airport station and downtown San Rafael, began operation in 2016. After the SMART trip you’ll transfer to Richmond to board the Amtrak Capitol Corridor for Sacramento. The afternoon is yours to spend in Old Sacramento, home of the California State Railroad Museum, best of its kind in the nation. Gather this evening for a farewell dinner.
Meals included: Breakfast & Dinner 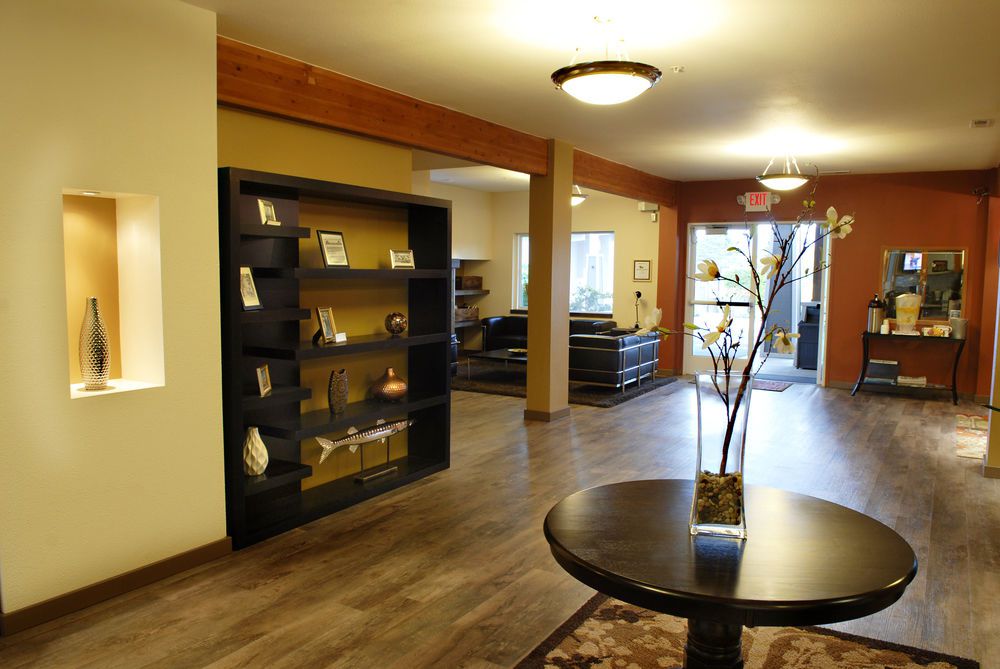 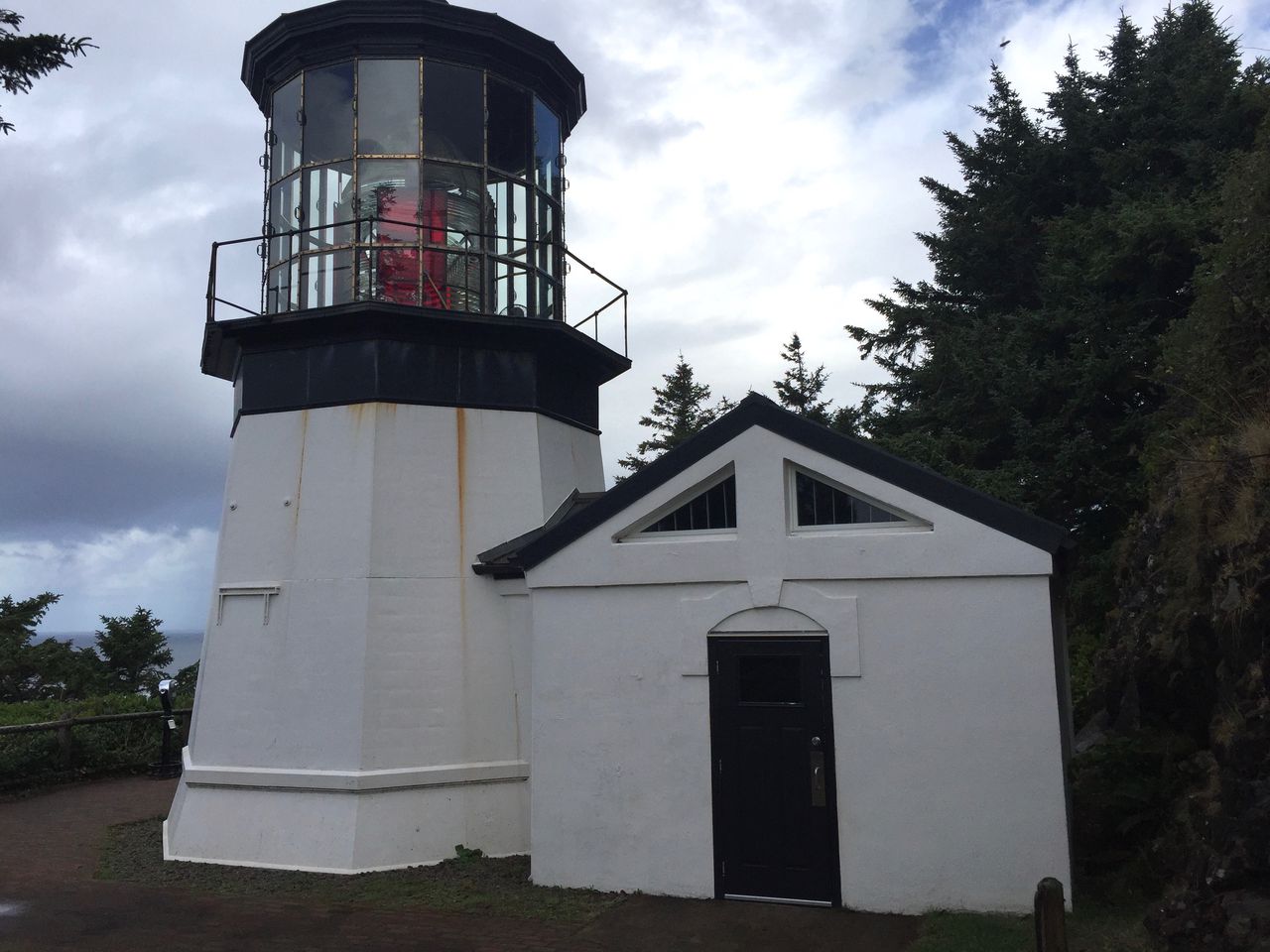 Each of the Waterfront hotel’s spacious guestrooms and suites have been nautically updated including flat screen TVs, pillow top king beds, and MP3 docking stations. With a panoramic view of the City and the Delta from the picturesque Waterfront Courtyard, The University Plaza Waterfront hotel presents an unmatched blend of luxurious accommodations, elegant meeting spaces and superb services, which make for an unforgettable stay.

Located along the San Francisco waterfront and steps away from the Embarcadero this hotel is perfect for exploring the city. Refined rooms with exposed brick walls offer bay or city views, plus free Wi-Fi, flat-screen TVs and iPod docks.

Enjoy the best of historical Old Town Sacramento and the modernity of downtown with this hotel that is a centrally located providing a comfortable all-suites experience. The modern one-bedroom suites come with living rooms with pull-out sofas, plus kitchenettes with microwaves, minifridges and coffeemakers. They also feature flat-screen TVs with premium cable channels, and WiFi.

Colorado Scenic Railroads In The Rockies

Arizona & New Mexico SouthWestern Railroad Hospitality
Interested in a different Railroad Journey? Contact us to learn about designing your own custom adventure!